My room in the castle hotel was at the quiet end of a long narrow wing of the early 19th- century structure. The only sound all night was the creaking of wooden floorboards as I made my way to and from the bathroom. The smaller, but more historic, 14-century palace was visible from my window as a completely separate structure. During renovations in the 1970s, Renaissance wall paintings were uncovered there.

After breakfast I sat on a bench in front of the hotel and waited for my cousins Peter and Patricia, who would join me for the day’s hike. A sign outside a bakery across the street advertised “Coffee Togo.” Another Americanization gone wrong. English terms have a long tradition of creeping into all aspects of German culture. I recently noticed the suffix “Arizona” on meat labels in butcher shops, apparently indicating a pre-seasoned, spicy disposition. Among the huge variety of cold-cuts there are recently added, healthier sounding varieties like “wellness” and “sport”.

My cousins arrive and we head east out of the Krebsbach valley onto the rolling hills of the Kraichgau. Peter is the head of a local environmental society and his knowledge of plants, geology, local history and especially birds, runs deep. He is a collector of most things and his large basement in his home (his “museum”) is crammed with thousands of slides, rocks, lamp shades, antiques, etc. His most treasured collection includes dozens of historic paper hole punchers used throughout history , but only in the state of Baden-Wuerttemberg. Patricia is his younger sister and prefers a more typical, uncluttered and immaculately clean German household. A repo-woman by trade, she takes her hiking and photography seriously. As we walk and reminisce about our families in the old days, the fir-covered sandstone hills of the Odenwald to the north come into view, with the extinct volcano of the Katzenbuckel (Cat’s back) forming a prominent knob. It came to life some 60 million years ago when Africa rammed into Europe, cracking the crust and enabling magma to bubble up to the surface. Nearby is the small Odenwald town of Finkenbach where, in the late 1970s, my cousins and I made a trek to the town’s annual, multi day open-air rock festival. The main attraction was the band Guru Guru, whose music is described by critics as psychedelic drug-influenced Kraut rock. Germany’s answer to the Grateful Dead. We recall that by the time we got there the main field by the stage was full of hippies and other assorted Odenwald freaks, so we made our way to the far end, where the field suddenly formed a steep slope upwards. Hippies camping in curved-roof gypsy wagons (hard-topped Conestogas) had cordoned this area off to make a children’s playground for festival attendees’ kids. I try to be considerate. “Hey man, can we sit back here?” I ask one of the hippies. He’s wearing a sleeveless denim jacket with a home-made design on the back consisting of a smiling sun ringed with the words “Atomkraft, was sonst? (nuclear power, what else?).” The two side-by-side letter s’s  are made to look like Waffen SS lightning bolts. “You can until the “Ordner” ( somebody who keeps order) arrives, and then you all have to leave!” is the answer delivered with a condescending sneer. I watched the hordes of festival goers streaming by me invading the playground area. “Fuck the Ordner.” The hillside offered a good view and dry real estate above the muddy field. A bottle of Old Kentucky Rifle soon washed away any feelings of guilt or worries about the hippy verger that never materialized.

Emerging from the forest we drop into a stream valley and enter the village of Wollenberg, where chestnut trees seem to have been planted in every courtyard among the old houses. These trees were much favored as plantings in beer gardens because their deep shade cast over cellars kept the drink cool. 19th-century poet Conrad Ferdinand Meyer wrote the beautiful poem “Black-shadowing Chestnut” that still begs for a proper translation into English.

Bending northwards the land begins to fall steeply towards the gorge of the Neckar River. An old farm, the Finkenhof, overlooks the gorge. Just a few feet to the side of one of the farm lanes is a large pyramid of sandstone which serves as the burial marker of a duke who founded the farm. In this area of the Kraichgau most monuments, castles, and barns are made of blocks of the Buntsandstein (Colorful Sandstone). This dark red sandstone was formed 245 million years ago as sand grains were deposited in an ancient river system. Further to the north the present-day Neckar River has carved deep cliffs into the rock, which are often topped with small medieval fortresses.

In this area the Neckar valley is bounded by the slightly younger limestone of the Muschelkalk Formation, which was deposited in an ancient ocean on top of the Buntsandstein. We switchback our way down through the limestone towards the Neckar River. Here, along the western bank, are several gated tunnels leading into the side of the mountain.  The soft gypsum found in the limestone in this area made the tunneling easier. The tunnels were used in 1944 – 45 during the Nazi’s “Operation Goldfisch”, which involved moving the airplane motor manufacturing facilities of the Daimler/Benz Company into the tunnels to provide protection from Allied aerial bombardments. Thousands of concentration camp prisoners from the nearby camp at Neckarelz were used as forced labor, spending long stretches of time underground. Peter tells me they were marched daily from their camp across the river via a bridge to the tunnels in plain view of the inhabitants of the area – yet after the war none claimed to remember this. In fact, it wasn’t until the 1980’s that the nearby town of Mosbach decided to research and  chronicle the concentration camp and former production facilities in the tunnels. Hundreds died during their time in the tunnels, in the camp, and during a forced march to a different camp near war’s end. After the war most of the equipment was given to Russia as war reparations.

In the town of Obrigheim we pause and drink coffee, watching the Neckar River barge traffic drift downstream or labor upstream against the current. A series of 27 locks built on the Neckar in the 1920’s and 30’s now make it possible for barges over 100 meters long to travel more than 200 km upstream from the river’s confluence with the Rhine. Prior to this ships were either pulled by horses or pulled themselves along a submerged chain attached to the floor of the river. The lock structures have also partially dammed the river, making it wider and flooding out rapids that once posed an obstacle to boat traffic. The river was different when Mark Twain saw it in 1878. Suffering from writer’s block, he came to Heidelberg and the Neckar Valley for a change of scenery. He hiked from Heidelberg to Heilbronn and returned partly by boat, providing an account of his journey in A Tramp Abroad. His raft trip down the Neckar is pure fiction, but served as inspiration for Huckleberry Finn. Twain reported that “The Neckar is in places so narrow that a person can throw a dog across it, if he has one; when it is also sharply curved in such places, the raftsman has to do some pretty nice snug piloting to make the turns.” The rafts he mentions were made of floating lumber cut in the Black Forest. The flooding on the Neckar was also known to Twain: “A hatful of rain makes high water on the Neckar, and a basketful produces an overflow.” 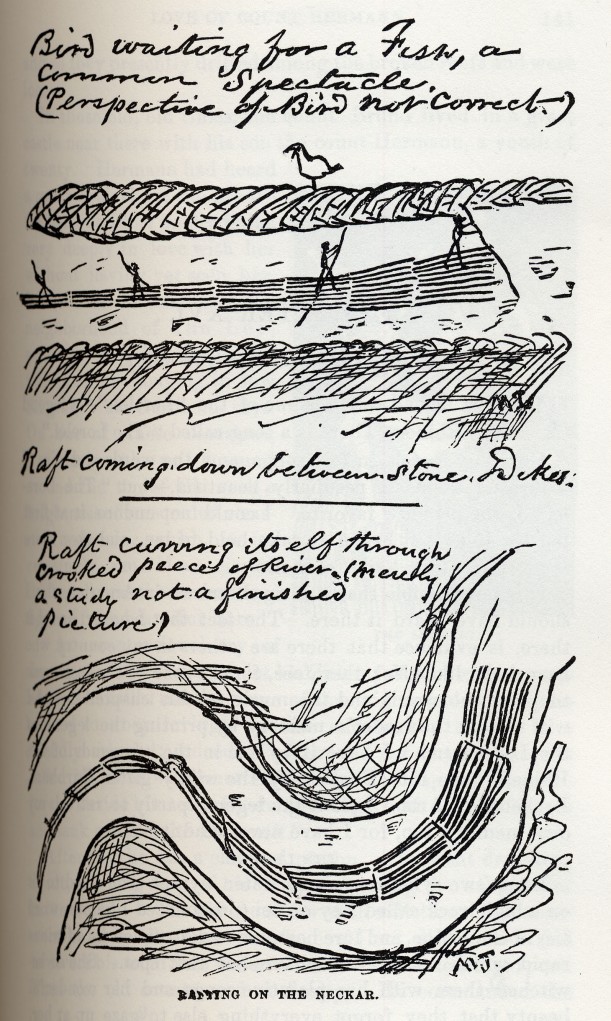 “Rafting on the Neckar” from Twain’s A Tramp Abroad.

We cross the Neckar along with rush hour traffic making its way between Mosbach and Obrigheim and quickly find the trail that takes us up the steep hill of the Schreckberg on the other side. This is a sun-baked slope formed in a part of the Muschelkalk known as the Wellenkalk (“Wavy Limestone”). The contorted layers were formed when earthquakes deformed soft sedimentary layers of lime mud on the ancient seafloor. The dry, hot slope of the Schreckberg is famous for its biodiversity of grasshoppers. In fact, it has the only signed educational path in Germany dedicated solely to grasshoppers.

Near dark we reach Peter’s house in Mosbach where I’ll spend my second night. After a wonderful dinner cooked by Peter’s wife Petra I head to my bedroom. My feet feel strange. I take off my boots (guaranteed to not cause blisters) and see a hideous sight. Blisters bigger than any I can remember from the Appalachian Trail. Nothing for it but to pop them and hope for the best. Another strange sensation manifests itself – rawness between my upper thighs. Nothing in my first aid kit will work on this. No Gold Bond or duct tape! I shower and drop off to sleep – tomorrow is the longest day of the trip. Distance hiked: 17 miles. Towns hiked through: Neckarbishofsheim, Wollenberg, Kaelbertshausen, Obrigheim, Diedesheim, Mosbach. Streams crossed: Krebsbach, Wolleb, Neckar River.